A primary requirement of the WMAP mission is to observe the full sky. Since a major goal of cosmology is to determine the statistical properties of the universe, it is clear that the largest possible number of sky samples improves constraints on cosmological models. The measurement of each individual position on the sky is an independent sample of the physics of the universe. Moreover, full sky coverage is absolutely required to accurately determine the low-order spherical harmonic moments. While the largest angular scales were observed by COBE, WMAP re-measures the full sky with higher resolution to:

As shown in the diagram below WMAP observes the full sky every six months to provide fourfold redundancy in the data collected over a period of two years.

The WMAP scan strategy plays an important role in systematic error rejection. It was designed with the following goals in mind:

Since WMAP is a differential experiment - it measure the difference in temperature between two points a fixed distance apart on the sky - it is also desirable that the angular separation between the two observing beams should be "large" in order to maintain sensitivity to signal at large angular scales. This is important for comparing the WMAP results to COBE, for properly normalizing the angular power spectrum, and for retaining sensitivity to the dipole which will serve as WMAP's primary calibration source. The separation between WMAP's two lines of sight is roughly 141° (smaller for some channels, larger for others).

The scan strategy that was ultimately adopted combines a "fast" spin about the spacecraft symmetry axis with a slow precession 22.5 ° about the Sun-WMAP line (which is always within 0.1° of the Sun-Earth line at L2). Since each telescope line of sight is ~70° off the symmetry axis, the path swept out on the sky by a given line of sight resembles a Spirograph® pattern that reaches from the north to south ecliptic poles. Since the spin and precession periods are incommensurate, the combined motion will cause the observing beams to fill an annulus centered on the local solar vector with inner and outer radii of ~48° and ~93° respectively. Thus WMAP will observe more than 30% of the sky each day and will observe the ecliptic poles every day. The spin period will be 2.2 minutes while the precession period will be 1 hour. The image below depicts the WMAP scan pattern after one complete spacecraft precession (1 hour); the bold circle shows the path for a single spin (2.2 minutes). 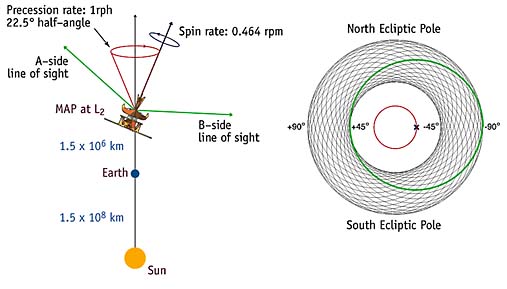 Click on the link to scan pattern image to see the scan pattern superposed on a model sky map. The map is displayed in ecliptic coordinates in which the ecliptic equator runs horizontally across the map. Note that because of the large size of the annulus, the beams will always see a substantial modulation due to the CMB dipole. Since the dipole anisotropy was precisely measured by COBE, this known modulation pattern serves as an ideal continuous calibration source.The WMAP scan strategy achieves a reasonable level of azimuth coverage in each sky pixel. For example, a pixel in the ecliptic equator is observed over ~30% of the possible angles of attack; a pixel at the cusp of the annular coverage at ~45° ecliptic latitude is observed over about 70% of possible angles of attack; and a pixel near the ecliptic poles is observed from 100% of the possible azimuth orientations. A large azimuth coverage provides numerous desirable features in the data:

From the standpoint of azimuth coverage, the WMAP strategy is not as complete as COBE's, which achieved nearly 100% azimuth coverage in all pixels. However, in order to achieve such completeness, the spacecraft spin axis must ultimately point to every pixel on the sky which is less desirable from the standpoint of systematic error avoidance. The WMAP strategy achieves reasonable azimuth coverage consistent with strong systematic error constraints. Extensive simulations of the map making and power spectrum estimation procedures have shown that the strategy is more than adequate to meet WMAP's scientific goals.As WMAP orbits the Sun, the annular scan pattern continuously revolves around the sky so that full sky coverage is first achieved after 6 months of observing at L2, as depicted below. This coverage is repeated every six months for the duration of the mission. The redundancy of this coverage provides an important stability check as several independent full sky maps based on independent six month intervals can be compared for consistency. 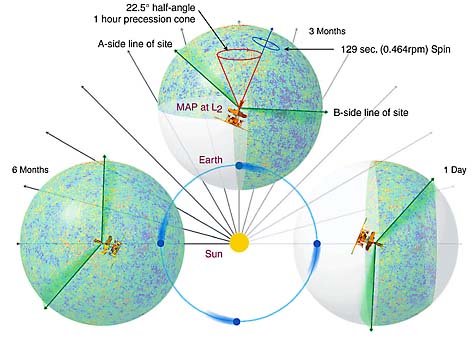