WMAP's Microwave System consists of ten 4-channel “differencing assemblies”, each of which receives signals from a pair of feeds. The output of each assembly is proportional to the temperature (brightness) difference between the two lines of sight on the sky. To improve sensitivity and stability the system has a cold section where the first stages of microwave signal amplification occur, then a warm section where the remaining amplification occurs before being converted to an electrical signal. The cold portion resides in the Focal Plane Assembly (FPA) box and is passively-cooled by large radiators on either side of the primary telescope mirrors. The warm portion resides below the FPA in the Receiver Box (RXB), which sits inside the thermally isolating cylinder that separates the warm spacecraft hub from the cold FPA and optics.

The microwave system consists of ten 4-channel differencing assemblies, one for each pair of feeds. One assembly operates at 22 GHz, one at 30 GHz, two at 40 GHz, two at 60 GHz, and four at 90 GHz. The frequency bands were chosen to lie within commercial standards to allow the use of off-the-shelf components where possible. The base of an A-side feed in the Focal Plane Assembly (FPA) is attached to a low-loss orthomode transducer (OMT) which separates the signal into two orthogonal polarization modes, A and A'. The A side signal is differenced against the orthogonal polarization mode, B', from the corresponding B-side feed, and vice-versa. 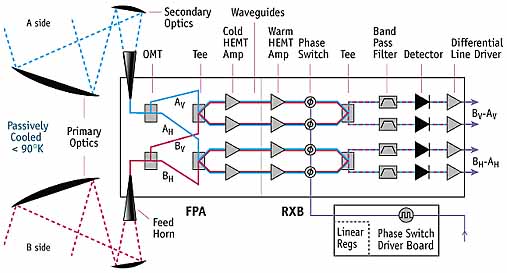 The differencing is accomplished by first combining the two signals A and B' in a hybrid Tee to form (A+B')/sqrt(2) and (A–B')/sqrt(2), then amplifying each in two cold HEMT amplifiers and sending the phase-matched outputs to the warm receiver box (RXB) via waveguide. In the RXB the two signals are amplified in two warm HEMT amplifiers, then one arm is phase switched between 0° and 180° at 2.5 kHz, then split back into A and B' in a second hybrid Tee. At this point, the two signals are square-law detected, amplified by two line drivers, and sent to the Analog Electronics Unit for synchronous demodulation and digitization. The other pair of signals, A' and B, are differenced in the same manner giving a total of four amplification channels per differencing assembly. In WMAP jargon, each of these pairs of signals is referred to as a “radiometer” and both together as a “differencing assembly”. In principal, the two channels from a single radiometer provide redundant measurements of the difference A–B'; in practice, the average of these two channels is more stable than either alone.

The splitting, phase switching, and subsequent combining of the signals enhances the instrument's performance in two ways:

The first stage amplifiers operate at a stable low temperature to obtain the required sensitivity. Since HEMT amplifier noise decreases smoothly and only gradually with cooling WMAP employs passive radiators to cool the first stage amplifiers to ~95 K. Passive cooling avoids the significant cost and complication that active (cryogenic) cooling imposes. However, HEMT amplifiers exhibit relatively large intrinsic gain fluctuations when operated cold, so as many gain stages as possible should be warm once sufficient amplification has been achieved.

The HEMT amplifiers were custom-built for WMAP by the Electronics Division of the National Radio Astronomy Observatory, based on designs created for WMAP by Marian Pospieszalski using a HEMT device wafer manufactured for WMAP by Hughes Research Laboratories. The phase switches and band pass filters were manufactured by Pacific Millimeter, the tees and detectors by Millitech, the OMTs by Gamma-f, the waveguide by Custom Microwave and Aerowave.

The diagram below shows the FPA box resting on the thermally isolating cylinder (with the warm RXB inside of it). The enlarged detail shows a single 4-channel differencing assembly attached to a pair of feed horns. The junction near the base of the feed is the polarization splitter (OMT). The cold HEMT amplifiers reside in the brass blocks at the top of each long waveguide run. The warm amplifiers and phase switches reside in the “entertainment center” at the bottom of the long waveguide. Each of the long waveguides have a section of stainless steel to provide ~200 K of thermal isolation between the cold and warm stages. The photo at right shows the inside of fully assembled FPA box. The stainless steel sections of waveguide leading to the RXB can be seen near the bottom of the photo. The amplifiers in this section of the instrument are directly coupled to the radiators with heavy copper or aluminum cooling straps. 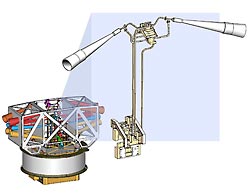 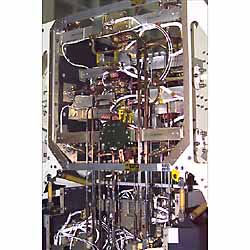 The Analog Electronics Unit (AEU) takes in the 40 post-detection electrical signals from the differencing assemblies and processes them into digital signals that can be handled by the spacecraft data system. In the AEU, the main signal is sent through a high-pass filter, and two fixed gain amplifier, the second of which has its gain set on the ground using precision resistors to accommodate the particular differencing assembly signal level. The signal is then demodulated synchronously at the 2.5 kHz phase-switch rate. A blanking period of 6 µsec (from 1 µsec before to 5 µsec after the switch event) is applied to avoid systematic errors due to switching transients. The demodulated signal is then sent through a 2-pole Bessel low-pass filter with its 3 dB point at 100 Hz. Finally, the signal is sent through a voltage-to-frequency (V/F) converter, whose output latched for read-out by the instrument processor in the Digital Electronics Unit (DEU) before being losslessly compressed (by a factor of ~2.5) and telemetered to the ground.

The AEU also contains two boards for handling high precision voltage and temperature sensing for the instrument. These monitors go well beyond the usual health and safety functions; they exist primarily to provide evidence of voltage and thermal stability of the critical items in the instrument, and should variations be seen, these monitor signals can be used as tracers and diagnostics of the effects on the science signals.

The timing of the phase switching, demodulation and signal integration are derived from the DEU. The DEU supplies a 2.5 kHz clock to the RXB and AEU for phase switching and demodulation, and a 5 kHz pulse to the AEU for blanking the science signal for 6 µsec during the phase switch transitions. The DEU supplies a 1 MHz clock, derived from a 24 MHz crystal oscillator, to the V/F converter in the AEU. The DEU also supplies a 25.6 msec (64 cycles at 2.5 kHz = 39.0625 Hz) 1 µsec negative logic clock to the AEU for latching the 14-bit science data samples. All 40 channels are integrated in the AEU and sent to the DEU every 25.6 msec. All of these DEU clock signals are synchronous with one another.

To reduce the overall data rate from the observatory, the DEU co-adds successive 25.6 msec samples from the AEU prior to compression and telemetry. Since the lower frequency channels have larger beam sizes, the frequency bandwidth of these channels is lower, so the integration time per observation can be longer without losing information. Hence the number of samples that are co-added by the DEU is 5,5,4,3,2 for K, Ka, Q, V, and W bands respectively. This corresponds to an effective integration time of 128.0, 128.0, 102.4, 76.8, and 51.2 msec per observation in each of the respective bands.

The Power Distribution Unit (PDU) provides all instrument power. Every HEMT gate and drain is regulated with a remote-sense feedback. The PDU clamps the voltage between the gate and drain to be <2 V to prevent damage to the devices. The drain voltages are commandable in 8 steps (~70 mV resolution) between 1.0 to 1.5 V, and the gates are commandable in 16 steps (~35 mV resolution) between –0.5 V to 0 V. The PDU can accept on/off commands to remove power from any subset of the 20 radiometers (halves of a differencing assembly). The purpose of this is to be able to continue operating if a radiometer is producing oscillations that disturbs other radiometers.