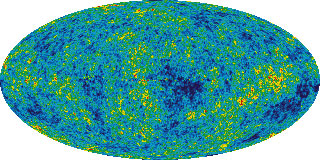 A Detailed Picture of the Early Universe

The cosmic microwave background (CMB) radiation is the radiant heat left over from the Big Bang. It was first observed in 1965 by Arno Penzias and Robert Wilson at the Bell Telephone Laboratories in Murray Hill, New Jersey. The properties of the radiation contain a wealth of information about physical conditions in the early universe and a great deal of effort has gone into measuring those properties since its discovery. This radiation (and by extension, the early universe) is remarkably featureless; it has virtually the same temperature in all directions in the sky.

In 1992, NASA's Cosmic Background Explorer (COBE) satellite detected tiny fluctuations, or anisotropy, in the cosmic microwave background. It found, for example, one part of the sky has a temperature of 2.7251 Kelvin (degrees above absolute zero), while another part of the sky has a temperature of 2.7249 Kelvin. These fluctuations are related to fluctuations in the density of matter in the early universe and thus carry information about the initial conditions for the formation of cosmic structures such as galaxies, clusters, and voids. COBE had an angular resolution of 7 degrees across the sky, 14 times larger than the Moon's apparent size. This made COBE sensitive only to broad fluctuations of large size.

The Wilkinson Microwave Anisotropy Probe (WMAP) was launched in June of 2001 and has made a map of the temperature fluctuations of the CMB radiation with much higher resolution, sensitivity, and accuracy than COBE. The new information contained in these finer fluctuations sheds light on several key questions in cosmology. By answering many of the current open questions, it will likely point astrophysicists towards newer and deeper questions about the nature of our universe.