The Big Bang Model is a broadly accepted theory for the origin and evolution of our universe. It postulates that 12 to 14 billion years ago, the portion of the universe we can see today was only a few millimeters across. It has since expanded from this hot dense state into the vast and much cooler cosmos we currently inhabit. We can see remnants of this hot dense matter as the now very cold cosmic microwave background radiation which still pervades the universe and is visible to microwave detectors as a uniform glow across the entire sky.

Foundations of the Big Bang Model 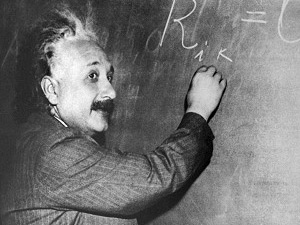 Albert Einstein at the Chalkboard- source unknown
The first key idea dates to 1916 when Einstein developed his General Theory of Relativity which he proposed as a new theory of gravity. His theory generalizes Isaac Newton's original theory of gravity, c. 1680, in that it is supposed to be valid for bodies in motion as well as bodies at rest. Newton's gravity is only valid for bodies at rest or moving very slowly compared to the speed of light (usually not too restrictive an assumption!). A key concept of General Relativity is that gravity is no longer described by a gravitational "field" but rather it is supposed to be a distortion of space and time itself. Physicist John Wheeler put it well when he said "Matter tells space how to curve, and space tells matter how to move." Originally, the theory was able to account for peculiarities in the orbit of Mercury and the bending of light by the Sun, both unexplained in Isaac Newton's theory of gravity. In recent years, the theory has passed a series of rigorous tests.

APM Galaxy Survey
After the introduction of General Relativity a number of scientists, including Einstein, tried to apply the new gravitational dynamics to the universe as a whole. At the time this required an assumption about how the matter in the universe was distributed. The simplest assumption to make is that if you viewed the contents of the universe with sufficiently poor vision, it would appear roughly the same everywhere and in every direction. That is, the matter in the universe is homogeneous and isotropic when averaged over very large scales. This is called the Cosmological Principle. This assumption is being tested continuously as we actually observe the distribution of galaxies on ever larger scales. The accompanying picture shows how uniform the distribution of measured galaxies is over a 70° swath of the sky. In addition the cosmic microwave background radiation, the remnant heat from the Big Bang, has a temperature which is highly uniform over the entire sky. This fact strongly supports the notion that the gas which emitted this radiation long ago was very uniformly distributed.

These two ideas form the entire theoretical basis for Big Bang cosmology and lead to very specific predictions for observable properties of the universe. An overview of the Big Bang Model is presented in a set of companion pages.