How Old is the Universe?

Until recently, astronomers estimated that the Big Bang occurred between 12 and 14 billion years ago. To put this in perspective, the Solar System is thought to be 4.5 billion years old and humans have existed as a genus for only a few million years. Astronomers estimate the age of the universe in two ways: 1) by looking for the oldest stars; and 2) by measuring the rate of expansion of the universe and extrapolating back to the Big Bang; just as crime detectives can trace the origin of a bullet from the holes in a wall.

Older Than the Oldest Stars? 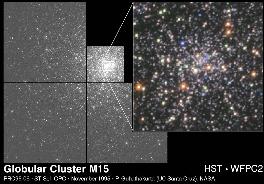 Text Link to the HST press release describing this image

The life cycle of a star depends upon its mass. High mass stars are much brighter than low mass stars, thus they rapidly burn through their supply of hydrogen fuel. A star like the Sun has enough fuel in its core to burn at its current brightness for approximately 9 billion years. A star that is twice as massive as the Sun will burn through its fuel supply in only 800 million years. A 10 solar mass star, a star that is 10 times more massive than the Sun, burns nearly a thousand times brighter and has only a 20 million year fuel supply. Conversely, a star that is half as massive as the Sun burns slowly enough for its fuel to last more than 20 billion years.

Extrapolating Back to the Big Bang

where Ho is the value of the Hubble constant.

If the universe has a very low density of matter, then its extrapolated age is larger:

If the universe contains a form of matter similar to the cosmological constant, then the inferred age can be even larger.

If we compare the two age determinations, there is a potential crisis. If the universe is flat, and dominated by ordinary or dark matter, the age of the universe as inferred from the Hubble constant would be about 9 billion years. The age of the universe would be shorter than the age of oldest stars. This contradiction implies that either 1) our measurement of the Hubble constant is incorrect, 2) the Big Bang theory is incorrect or 3) that we need a form of matter like a cosmological constant that implies an older age for a given observed expansion rate.

Some astronomers believe that this crisis will pass as soon as measurements improve. If the astronomers who have measured the smaller values of the Hubble constant are correct, and if the smaller estimates of globular cluster ages are also correct, then all is well for the Big Bang theory, even without a cosmological constant.

WMAP Can Measure the Age of the Universe

How does WMAP data enable us to determine the age of the universe is 13.77 billion years, with an uncertainty of only 0.4%? The key to this is that by knowing the composition of matter and energy density in the universe, we can use Einstein's General Relativity to compute how fast the universe has been expanding in the past. With that information, we can turn the clock back and determine when the universe had "zero" size, according to Einstein. The time between then and now is the age of the universe. There is one caveat to keep in mind that affects the certainty of the age determination: we assume that the universe is flat, which is well supported by WMAP and other data. If we relax this assumption within the allowed range, the uncertainty increase a bit. Inflation naturally predicts a very nearly flat universe.

The expansion age measured by WMAP is larger than the oldest globular clusters, so the Big Bang theory has passed an important test using data independent of the type collected by WMAP. If the expansion age measured by WMAP had been smaller than the oldest globular clusters, then there would have been something fundamentally wrong about either the Big Bang theory or the theory of stellar evolution. Either way, astronomers would have needed to rethink many of their cherished ideas. But our current estimate of age fits well with what we know from other kinds of measurements.