How Fast is the Universe Expanding?

The expansion or contraction of the universe depends on its content and past history. With enough matter, the expansion will slow or even become a contraction. On the other hand, dark energy drives the universe towards increasing rates of expansion. The current rate of expansion is usually expressed as the Hubble Constant (in units of kilometers per second per Megaparsec, or just per second).

Hubble found that the universe was not static, but rather was expanding!

In the 1920s, Edwin Hubble, using the newly constructed 100" telescope at Mount Wilson Observatory, detected variable stars in several nebulae. Nebulae are diffuse objects whose nature was a topic of heated debate in the astronomical community: were they interstellar clouds in our own Milky Way galaxy, or whole galaxies outside our galaxy? This was a difficult question to answer because it is notoriously difficult to measure the distance to most astronomical bodies since there is no point of reference for comparison. Hubble's discovery was revolutionary because these variable stars had a characteristic pattern resembling a class of stars called Cepheid variables. Earlier, Henrietta Levitt, part of a group of female astronomers working at Harvard College Observatory, had shown there was a tight correlation between the period of a Cepheid variable star and its luminosity (intrinsic brightness). By knowing the luminosity of a source it is possible to measure the distance to that source by measuring how bright it appears to us: the dimmer it appears the farther away it is. Thus, by measuring the period of these stars (and hence their luminosity) and their apparent brightness, Hubble was able to show that these nebula were not clouds within our own Galaxy, but were external galaxies far beyond the edge of our own Galaxy.

Hubble's second revolutionary discovery was based on comparing his measurements of the Cepheid-based galaxy distance determinations with measurements of the relative velocities of these galaxies. He showed that more distant galaxies were moving away from us more rapidly:

This discovery marked the beginning of the modern age of cosmology. Today, Cepheid variables remain one of the best methods for measuring distances to galaxies and are vital to determining the expansion rate (the Hubble constant) and age of the universe.

What are Cepheid Variables?

The structure of all stars, including the Sun and Cepheid variable stars, is determined by the opacity of matter in the star. If the matter is very opaque, then it takes a long time for photons to diffuse out from the hot core of the star, and strong temperature and pressure gradients can develop in the star. If the matter is nearly transparent, then photons move easily through the star and erase any temperature gradient. Cepheid stars oscillate between two states: when the star is in its compact state, the helium in a layer of its atmosphere is singly ionized. Photons scatter off of the bound electron in the singly ionized helium atoms, thus, the layer is very opaque and large temperature and pressure gradients build up across the layer. These large pressures cause the layer (and the whole star) to expand. When the star is in its expanded state, the helium in the layer is doubly ionized, so that the layer is more transparent to radiation and there is much weaker pressure gradient across the layer. Without the pressure gradient to support the star against gravity, the layer (and the whole star) contracts and the star returns to its compressed state. 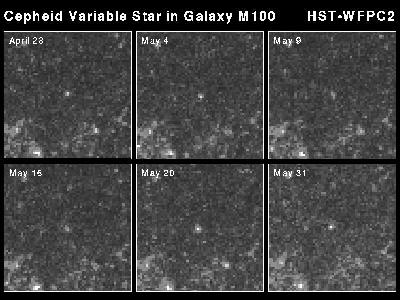 Text Link to the HST press release describing this image.

There have been a number of difficulties associated with using Cepheids as distance indicators. For much of the last century, astronomers used photographic plates to measure the fluxes from stars. The plates were highly non-linear and often produced faulty flux measurements. Since massive stars are short lived, they are always located near their dusty birthplaces. Dust absorbs light, particularly at blue wavelengths where most photographic images were taken, and if not properly corrected for, this dust absorption can lead to erroneous luminosity determinations. Finally, it has been very difficult to detect Cepheids in distant galaxies from the ground: Earth's fluctuating atmosphere makes it impossible to separate these stars from the diffuse light of their host galaxies.

Another historic difficulty with using Cepheids as distance indicators has been the problem of determining the distance to a sample of nearby Cepheids. In recent years, astronomers have developed several very reliable and independent methods of determining the distances to the Large Magellanic Cloud (LMC) and Small Magellanic Cloud (SMC), two of the nearby satellite galaxies of our own Milky Way Galaxy. Since the LMC and SMC contain large number of Cepheids, they can be used to calibrate the distance scale.

Technological advances have enabled astronomers to overcome a number of the other past difficulties. Detectors called CCDs (charge coupled devices- like those used in digital cameras) made possible accurate radiation flux measurements. These detectors are also sensitive in the infrared wavelengths. Dust is much more transparent at these wavelengths. By measuring fluxes at multiple wavelengths, astronomers were able to correct for the effects of dust and make much more accurate distance determinations.

These advances enabled more accurate study of the nearby galaxies that comprise the "Local Group" of galaxies. Astronomers observed Cepheids in both the metal rich inner region of the Andromeda galaxy and its metal poor outer region. (To an astronomer, a "metal" is any element heavier than helium - the second lightest element in the periodic table. Such elements are produced in stars and are ultimately released into the interstellar medium as the stars evolve.) This work showed that the properties of Cepheids did not depend sensitively on chemical abundances. Despite these advances, astronomers, limited by the Earth's atmosphere, could only measure the distances to the nearest galaxies. In addition to the motion due to the expansion of the universe, galaxies have "relative motions" due to the gravitational pull of their neighbors. Because of these "peculiar motions", astronomers need to measure the distances to distant galaxies so that they can determine the Hubble constant.

Trying to push deeper into the universe, astronomers have developed a number of new techniques for determining relative distances to galaxies: these independent relative distance scales now agree to better than 10%. For example, there is a very tight relation, called the Tully-Fisher relation, between the rotational velocity of a spiral galaxy and its luminosity. Astronomers also found that Type Ia supernova, which are thought to be due to the explosive burning of a white dwarf star, all had nearly the same peak luminosity. However, without accurate measurements of distance to large numbers of prototype galaxies, astronomers could not calibrate these relative distance measurements. Thus, they were unable to make accurate determinations of the Hubble constant.

Over the past few decades, leading astronomers, using different data, reported values for the Hubble constant that varied between 50 (km/sec)/Mpc and 100 (km/sec)/Mpc. Resolving this factor of two discrepancy was one of the most important outstanding problems in observational cosmology.

The Key Project program outlined the major goals of the Hubble Space Telescope (HST). On of the major goals of HST was to complete Edwin Hubble's program of measuring distances to nearby galaxies. While the Hubble Space Telescope is comparable in diameter to Hubble's telescope on Mount Wilson, it had the advantage of being above the Earth's atmosphere, rather then being located on the outskirts of Los Angeles. NASA's repair of the Hubble Space Telescope restored its vision and enabled the Key Project program. The photos below show before and after images of M100, one of the nearby galaxies observed by the key project program. With the refurbished HST, it was much easier to detect individual bright stars in M100, a necessary step in studying Cepheid variables. The project also checked to see if the properties of Cepheid variables are sensitive to stellar composition.

HST image of M100 before and after repair

Text Link to the HST press release describing this image.

Overall, the key project attempted to get distances to 20 nearby galaxies. With this large sample, the project calibrated and cross checked a number of the secondary distance indicators. Because M100 is close enough to us that its peculiar motion is a significant fraction of its Hubble expansion velocity, the key project team used relative distance indicators to extrapolate from the Virgo cluster, a nearby cluster of galaxies containing M100, to the more distant Coma cluster and to obtain a measurement of the Hubble constant of 70 (km/sec)/Mpc, with an uncertainty of 10%.

WMAP and the Hubble Constant

By characterizing the detailed structure of the cosmic microwave background fluctuations, WMAP has accurately determined the basic cosmological parameters, including the Hubble constant. The current best direct measurement of the Hubble constant is 73.8 km/sec/Mpc (give or take 2.4 km/sec/Mpc including, both random and systematic errors), corresponding to a 3% uncertainty. Using only WMAP data, the Hubble constant is estimated to be 70.0 km/sec/Mpc (give or take 2.2 km/sec/Mpc), also a 3% measurement. This assumes that the universe is spatially flat, which is consistent with all available data. This measurement is completely independent of traditional measurements using Cepheid variables and other techniques. However, if we do not make an assumption of flatness, we can combine WMAP data with other cosmological data to get 69.3 km/sec/Mpc (give or take 0.8 km/sec/Mpc), a 1% solution that combines different kinds of measurements. After noting that independent observations give consistent results, it is reasonable to combine information to get the best estimate of parameters.