WMAP's sun shield is only 4.5 meters wide. Now imaging this small object 1.5 million kilometers away from you. Impossible to see, you say? Two scientists working for the ESA's planned Gaia space mission know different! They were able to image the position of WMAP with a 2.2 meter telescope from a mountain top in Chile.

The experiment is a feasibility test of a new tracking scheme planned for Gaia, a spacecraft that needs positional data accuracy while stationed at L2 (like WMAP) that is far beyond the usual satellite tracking techniques. A proposal to track the spacecraft from Earth with optical telescopes, with accuracy of one part in a billion (absolute positioning to within 150 meters), now appears feasible thanks to WMAP!

"Gaia will measure the positions, distances, space motions, and many physical characteristics of some one billion stars in our Galaxy and beyond. For many years, the state of the art in celestial cartography has been the Schmidt surveys of Palomar and ESO, and their digitized counterparts. Gaia will provide the detailed 3-d distributions and space motions of all these stars, complete to 20-th magnitude. The measurement precision, reaching a few millionths of a second of arc, will be unprecedented. This will allow our Galaxy to be mapped, for the first time, in three dimensions. Some millions of stars will be measured with a distance accuracy of better than 1 per cent; some 100 million or more to better than 10 per cent." - for more information on Gaia, visit the mission site. 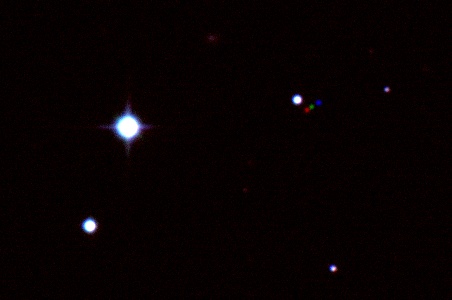 The above image is a composite of 3 images taken a few minutes apart with the individual images rendered in red, green, and blue. WMAP can be seen moving across this image as the sequence of colored dots in the upper right quadrant.